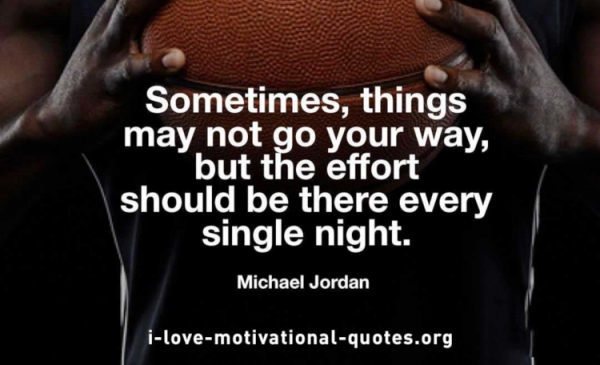 Famous sports quotes are an incredibly useful motivational tool for young men and women who aspire to replicate their role models' actions and hope to become world champions in the future.

Participating in sports is an incredibly competitive environment, and participants are continually searching for inspiration to give them the edge over their competitors. Whether it's a boxer going for that elusive world title, or a player in a team sport like soccer, striving to help his team win the World Cup, there's a lot to be gained from hearing the words of sporting idols of the past.

Much of the inspiration for sportsmen and women comes from people who have competed in the heat of the moment and overcome immense odds to claim victory. Few things are more motivating than hearing from people who have snatched victory from the jaws of defeat or overcome a life-threatening injury to win against all odds.

Sportsmen and women who have been there and done it and are willing to share their wisdom with up and coming competitors is an incredible gift. Young athletes look up to role models in various competitions, and it's not just people who have achieved great things in their sport that help them overcome challenges to succeed. Very often, athletes resonate with the words of successful sportspeople from their country of birth or perhaps those who have overcome similar societal limitations to become a world champion.

That's what's so valuable about motivational quotes from famous sports people; they are broadly applicable and can motivate people in so many different walks of life. It's also important to recognize that it's not just aspiring athletes who are inspired by famous sportspeople's words. In fact, sports play a huge part in the lives of so many people in all corners of the world, and to some people, supporting their favourite sports team is at the center of their very existence.

For these people, motivational quotes from sportsmen and women apply to many aspects of their lives, perhaps in their professional and even personal lives. Such is the importance of sports that words from those that succeed are often adorned on people's walls, etched onto their clothing, and even replicated on bumper stickers that fans proudly place on their vehicles as they move around town.

In this regard, we're able to realize the enormous impact that sports have on all aspects of people's lives. Sportspeople are put on pedestals by fans and supporters, and their actions are held to exceptionally high standards. Through this, the intensely competitive nature of the sports world is in evidence, and it's clear to see why people place such huge emphasis on the nuggets of wisdom shared by sports idols in the past.

Let's hope that sportsmen and women of the current generation will continue to achieve great things against all the odds, meaning their famous sports quotes will be consigned to the history books and shared with aspiring competitors in the years to come.

Every day of my life, I’m trying to find a way to get better. - Ray Lewis

You miss 100 percent of the shots you don’t take. - Wayne Gretzky

A champion is someone who gets up when he can’t. - Jack Dempsey

Age is no barrier. It’s a limitation you put on your mind. - Jackie Joyner-Kersee

If you aren’t going all the way, why go at all? - Joe Namath

Either find a way to succeed or make one. - Suzie Hoyt

The mind is the limit. As long as the mind can envision the fact that you can do something, you can do it, as long as you really believe 100 percent. - Arnold Schwarzenegger

Push yourself again and again. Don’t give an inch until the final buzzer sounds. - Larry Bird

The more difficult the victory, the greater the happiness in winning. - Pele

I never left the field saying I could have done more to get ready and that gives me piece of mind. - Peyton Manning

If you fail to prepare, you’re prepared to fail. - Mark Spitz

You just can’t beat the person who never gives up. - Babe Ruth

I've never lost a game I just ran out of time. - Michael Jordan

If you think it's hard to meet new people, try picking up the wrong golf ball. - Jack Lemmon

Tweet
Published in Lifestyle
More in this category: « Old sideboard for the living room. How to bring it to perfect condition? The basics of astrology »
back to top